This is the second book I’ve read by Celeste Ng but, this is the first book she wrote. Published in 2014, research says she took 6 years and 4 full drafts to write the novel. The work is evident. The characters are multidimensional and the story is multifaceted without being confusing or too busy. It just seems we’ve been granted VIP access to the goings on of this family. 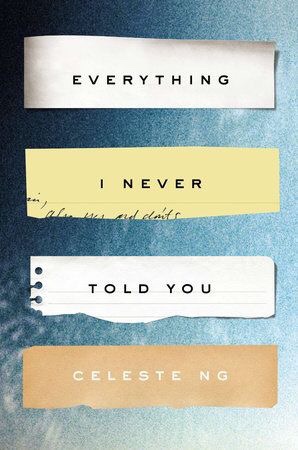 We meet the Lee family as they’re in breakdown over the disappearance of their middle daughter, Lydia. It will be several days and several revelations before Lydia’s body is dredged from the lake near their home. Ng likes to write about families in breakdown or acting in response to some seen or unseen threat. As with Little Fires Everywhere, with the missing child, she has created an environment of increased stress and anxiety and we just sit back and watch the cards fall.

The Lee’s are a mixed race Chinese American family living in white suburbia. Mom, Marilyn, blonde, raised by a widowed, traditional, Home Economic teacher mother, has lived her whole life desiring, even if sometimes failing, to be as different from her mother and the ‘majority’ around her at all times. So much so, she married a Chinese American professor, James. In contrast James, son of Chinese immigrants, experiencing discrimination in his workplace and community, has spent his whole life wanting to fit in. What we discover about them during this tragedy over Lydia is how the two of them have visited their unrecognized dreams onto the lives of each of their children. Nathan, the oldest boy is mistreated by his father, ignored by his mother and demonstrates violent masculinity, Lydia, the middle child, burdened the most with her mothers desire for academic achievement and probably the least capable of achieving it, has disappeared, and the youngest Hannah, completely ignored by both parents and is an apparent kleptomaniac. 🤦🏾‍♀️

At first blush you think you’ll walk away being able to blame one party over the other. I’m not sure I did. I think I was just wanting for people to own their shit and get it together. There is no curse greater than the one handed to you from your own parents. God bless the child that escapes and heals thyself.

Definitely another great read by Ng. #GoodBook Book 15 of 36

View all posts by Shawnerly